Early morning fish up the back of Narrabeen Lake today. It started out as another very quiet morning. I started fishing with the Rebel pop R for whiting and with no interest shown I soon switched over to the sx40 (348). Unfortunately there was a huge amount of fine green weed in the lake that kept clogging the hard body lures. I switched over to a blade in an attempt to cast out past the weed but unfortunately the weed was just too prolific.

At 7:30am I walked back to the creek under the new purple bridge and fished the Atomic Hardz Crank 38 for a few looks but not takers. I fished the creek up to the creek mouth where I switched to the super light 0.9kg Sunline Super Fluorocarbon sniper fished straight through with a Fish Arrow Flash-J Huddle 2” Huddle Tail Green Pumpkin / Silver colour. As soon as I switched to this setup I started getting hits.

Wading in the shallow sand flats there was less weed out on the point. In only about a foot of water I caught one small bream (18cm) and two flathead, the better going 41cm on the new ‘Truth Mat’. I then moved back under the bridge where I got smoked by what felt like a large flathead. I had no hope stopping it with the light line. Soon after I picked up a nice little whiting on the same soft plastic.

On my way back to the car (10am) the wind was now blowing into my face and there was a little bit of chop on the water. I had a feeling a flatty could come out of the weed beds near the car park so I flicked the Huddle soft plastic into the weeds and a nice 49cm Flatty was soon in my net. Not bad considering the 0.9kg line and the fish had taken the whole lure. After a few photos on the new truth mat he was soon on his way. Not a bad little morning all things considered.

All fish were successfully released. 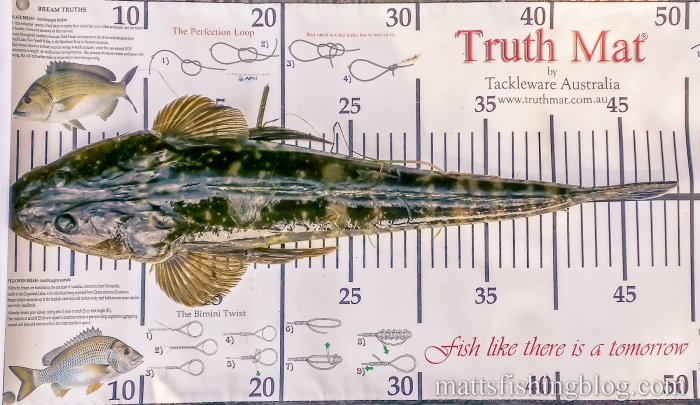